Because a fairly good number of visits to my blog are from people in India, I thought it might be worth noting that Amazon has just announced that the Kindle version of Waltzing Australia is available through Amazon India. I hope that proves to be good news for some of my readers.

His Friends Call Him Bony 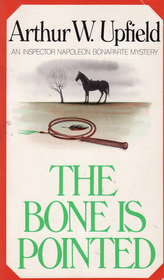 Among the most famous characters in Australian literature is a half white-half Aborigine gentleman of remarkable abilities: Detective Inspector Napoleon Bonaparte, or Bony to his friends. (It might seem like a stretch as a name, but a hundred years ago, when Bony would have been born, it was common for mixed-race children who were raised in orphanages to be given the names of famous people.)

Bony is the hero of a series of mysteries written by Arthur Upfield, who was born in Britain but lived in Australia most of his life. The depth of Upfield’s familiarity with the outback and its people make the books particularly enjoyable for those who love Australia, but the audience has never been limited to Australians only. Descriptions of the weirdly beautiful scenery of Australia’s more remote areas are accurate but also wonderfully evocative–and necessary, because in these books, the land is a key element. However, these well-crafted books have been long-time favorites around the world for nearly a century now primarily because of the beautifully developed character of their hero.

These mysteries would be more along the lines of Sherlock Holmes than they are of many gun-heavy modern mysteries. The murder has already taken place before Bony arrives on the scene, and the pursuit of the bad guys is an exercise that combines Bony’s considerable intelligence and Western education with his Aboriginal skills and experience.

There are nearly 30 mysteries in the series, but one that is a good starting place might be The Bone is Pointed, as it highlights the dualities of Bony’s background. The title refers to the Aboriginal practice of pointing a bone as part of transmitting a curse. Because the case is cold, and because it takes place in the vastness of the outback, Bony sees it as being ideal for his particular skill set:

“It is an investigation to be conducted only by me, on several counts. I am, of course, familiar with drawing-rooms, but they are not my natural background. This world of the bush is my background, my natural element. The bush is like a giant book offering to me plain print and the language I understand. The book is so big, however, that I require sometimes a great deal of time to find in it the passages interesting me … time is my greatest asset; without it I am as ordinary men.”

One comes to feel, after having read a few of these books, that one would recognize Bony if one were to meet him on the street. Little quirks and details, such as his inevitably badly rolled cigarettes, make me smile with familiar affection, as I feel I have come to know this remarkable man.

I don’t know that you need to care a great deal about mysteries as a genre to enjoy these books. They are so evocative of time and place, offer such insight into the cultures of the outback and of Aborigines, and are so finely drawn, that all you really need to care about is a good story. The nice thing is, if you do find Bony appealing, there are lots more adventures for you to enjoy.

Thomas Keneally is great at capturing telling moments, poignant details, emotional impact, and he’s exceptionally good at transmitting them to the reader. Who wasn’t impressed with Schindler’s List? Keneally writes a lot about history, but he also writes a lot about his native Australia, and in his book Outback, he captures so much of the essence of the country’s rugged interior that it has become one of my favorite books about Australia.

Keneally writes in the book’s forward, “It is as if in the immensity of outback Australia, people’s temperaments expand like yeast to occupy and give point to the immensities of space. It is hoped therefore that in these pages you will visit an enchanting and unknown country whose customs, secrets, ironies and landscapes you could not previously have guessed at.” Because I’ve visited that enchanting country, I can attest to the accuracy of Keneally’s observations, at least as far as the wonder of the land and friendliness of the people.

Outback is out of print now, or at least it’s not carried on Amazon, but there appear to be scads of people selling second-hand copies. If you’re interested in Australia, I encourage you to track down a copy.

I am often asked when and/or how my interest in Australia got started. As with so many of my interests, it started with books. Between his service in the military and his career in business, my dad had gotten to know a fair number of Australians, and as Australians are great book lovers, books were what they most often sent as gifts. The one I remember most vividly was a magnificent volume titled The Australians, with gorgeous photography by Robert Goodman and wonderfully crafted text by George Johnston. It came out in 1966, and today you can only find it in secondhand shops, but during my childhood and into adulthood, I returned to it often. I’m sitting now, flipping through the book, and smiling that I have visited so many of the places that captured my imagination when I was a youngster.

Many other books followed, but it was about 10 years later that I saw the first images that suggested to me that Australia was actually a potential travel destination. John Denver shot a TV special in Australia, and he took a gaggle of celebrities on a tour to some of the most interesting places. Among those places, the one that was burned into my memory from that program was Ayers Rock/Uluru.

It was many more years before I finally got to the place where I needed Australia–really needed to go and explore it for myself–and understood that it was okay to go. That was the trip, of course, that changed my life, the trip that became my book Waltzing Australia — the reason people ask me how my interest in Australia got started.

I like to think that someday, someone else will be asked how their interest in Australia got started, and that for someone, it will be with my book or my blog. We’ll see.

Anyway, John Denver really liked Australia, so he went more than once. In fact, the John Denver CDs in my collection were purchased in Australia– which means they have songs that I don’t think many folks in the United States have heard, including Sing Australia. It’s not my favorite John Denver song (hard to pick a favorite, though if I had to, I’d say Calypso), but it’s definitely the most Australian of his songs. Here, it is presented with a nice slide show of Aussie images.

The “again” above is because I used “A Town Like Alice” for the title of my first post about the time I spent in Alice Springs. That post was about my travels, but this one is about a piece of great Australian literature. Author Nevil Shute originally titled his book The Legacy, but after a movie and a mini-series named A Town Like Alice, more recent printings of the book have born what is by now the more familiar title.

A Town Like Alice was based on a number of true incidents from World War II– among them, the Japanese treatment of women prisoners in Malaysia and an Australian soldier who was tortured — that Nevil Shute combined into a harrowing but ultimately triumphantly romantic novel. While the story is fiction, it is sufficiently anchored in history to offer interesting insights — including the occasionally amusing contrasts between Australians and the British at that time.

The mini-series, which starred Brian Brown and Helen Morse, was wonderfully involving. It is fairly faithful to the book. However, as far as I can tell, it’s only currently available in VHS, at least in the United States. So if you’ve still got a tape player, you’re in luck. It’s also on YouTube, in 21, 14-minute segments. But the book has been reprinted, and is available in a format that doesn’t go out of date every few years — ink on paper.

Of course, this is not the only great book from Nevil Shute. It is, however, a story I have come to really love. It is astonishing what people can survive — and it’s a good reminder that hardship doesn’t rule out a happy ending.

For those of you who prefer electronic books but don’t have Kindles, Waltzing Australia is now available at Smashwords. That means it is now in forms that will work in Nooks, iPads, and any other device on which books can be downloaded.

If you’re interested, you can find it here: http://www.smashwords.com/books/view/143849

So now, everyone can have access to the adventure, the joy, the history, nature, and lore of Australia that flows through the pages of Waltzing Australia. I’m pleased that the delights of the land Down Under can now be shared with an even wider audience.

Of course, I’ll still keep posting peripheral material here — all the things that wouldn’t fit in the book. So you can continue to enjoy and learn about Australia, even if you don’t latch on to the larger story. But, of course, I do hope you’ll join me on my 20,000-mile trek around and across a country I found so enchanting.

It’s exciting to see one’s book begin to get noticed. I’ve gotten a couple of very good reviews lately, and next week, I’m going to be interviewed on blog talk radio! (Yeah, I know — it’s not exactly Oprah, but it’s a start.)

I hope some of you will listen to me chat with Becky Cortino about my book, my life, and my adventures. (And wish me luck—I’m new to this.)

On top of that, I received a most excellent review of my book today at Good Reads:

5 stars to: Waltzing Australia by Cynthia Clampitt
bookshelves: outdoor-adventure
recommended for: Anyone who has a dream
status: Read in October, 2008

Cynthia’s book wasn’t at all what I expected when I first picked it up. I thought it would be a nice, light travelogue of some time she spent in Australia. Boy, was I surprised.

First, this was no travelogue – it’s an intense love story between an American city-dweller and the vast continent of Australia. It starts with an infatuation from afar, and develops over the course of five months into a deep life-long love and respect.

Along the way, we are close witnesses to Cynthia’s discovery of large cities, small towns, and hundreds of miles of outback. Each new experience is described in gorgeous detail from the joy of feeding flocks of wild parrots to the agony of sleeping on a bus. Each page is overflowing with adventures, and we get to meet each city, animal, plant, and person along with Cynthia as if we’re right there with her.

“Waltzing Australia” is deeply emotional and personal. It’s an inspirational read about a strong woman living out the dream of a lifetime, and we are very fortunate that she decided to take us all along.